The indigenous artists making their own comics industry With Native American history almost entirely excluded from the US curriculum, a group of illustrators is rewriting the narrative.

Illustrator Weshoyot Alvitre grew up in Southern California’s Tongva homelands in the ’80s and ’90s. However, much like the tribe itself, she was rarely recognized in the place her ancestors lived. Like most of the US, Los Angeles doesn’t do a fantastic job of centering indigenous people in their teaching of history. When Native American people pop up at all, it’s inevitably as “headdress Indians” in the Sioux war; not as the people who lived, and continue to live, in the places we call home. “People ask me all the time where my name comes from,” she tells me. “And then they say ‘oh, I didn’t know we had Indians here.’”

Given the education system, you can’t really blame Angelenos for their ignorance. “In elementary school, I was part of Indian Ed,” Alvitre remembers. “They sent this paper home to your parents if they find out you have Indian blood, and we’d go into this classroom with this elderly Caucasian man. He wasn’t a teacher, I don’t think. We’d make rain sticks out of toilet paper tubes. I was in fourth grade and I knew it wasn’t right. I asked my mom to take me out of it.”

School curriculums are incredibly slow-moving creatures, and changing one to reflect marginalized experience requires the kind of lobbying that takes years and costs millions. Avlitre didn’t have years or millions. What she did have, however, was a fascination with Japanese manga comics, particularly Ghost in the Shell and Nausicaa of the Valley of the Wind. “They are so political,” she says. “They really opened my eyes as to how the comic medium can be used to talk about real-world issues.”

Alvitre grew up close in Satwiwa; the cultural centre for Chumash/Tongva education in the San Gabriel mountains. It was there that she met Native Americans in Comics author Michael Sheyashe (Caddo), who helped her realize that having a Native voice in the comic medium was vital and that she could do what those manga authors had done. Soon after, she began creating and selling her own indie comics in high school. “We had an indie rack at the local comic shop, and the manager encouraged me to do some and sell them in the shop. It helped me gain a bit of courage.” 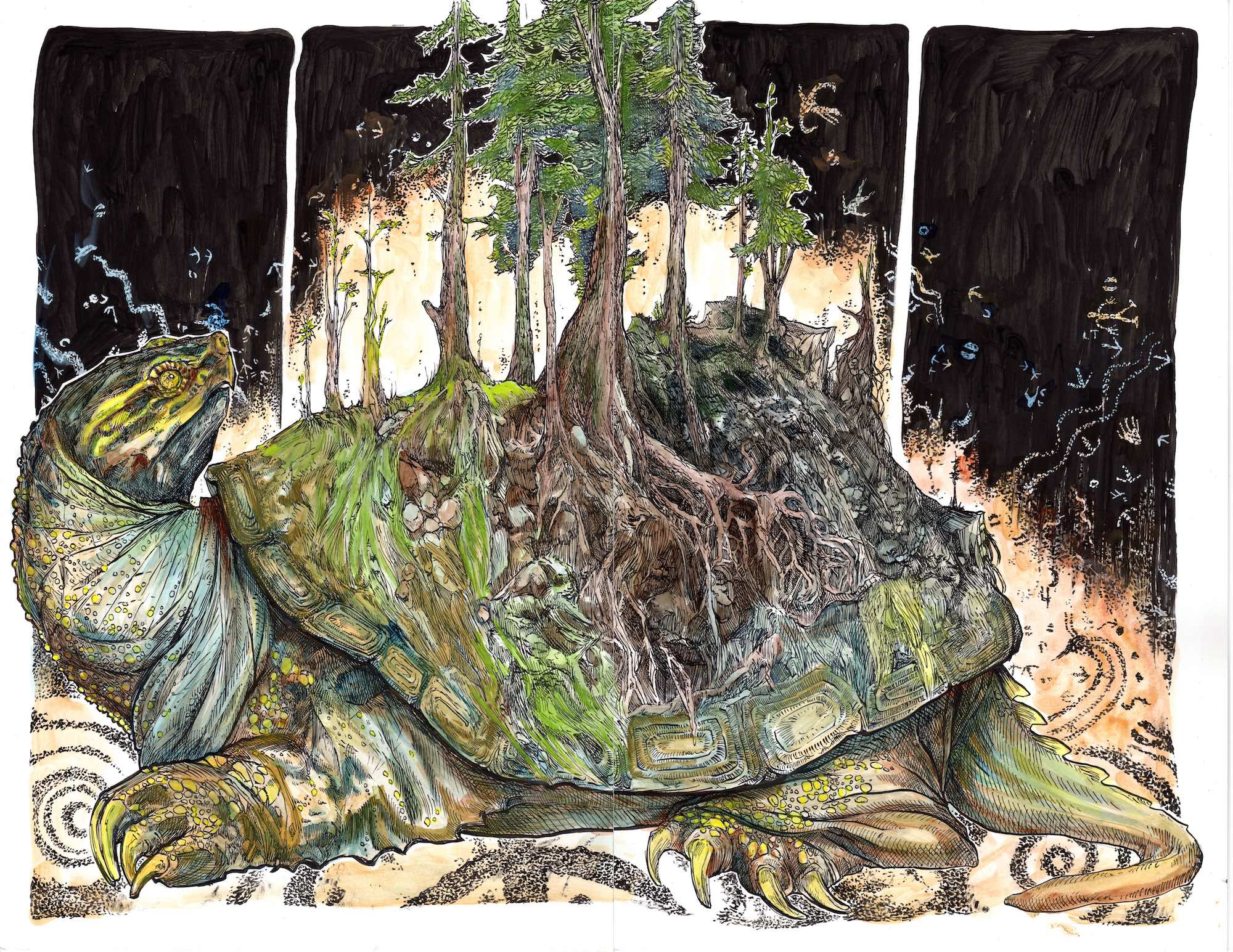 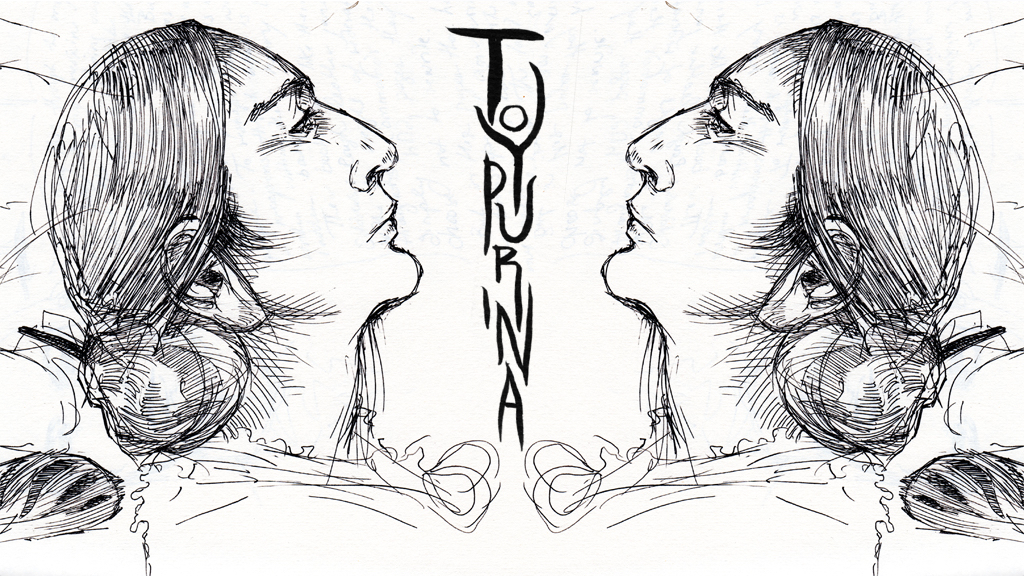 Using that confidence and experience, she broke into the industry as an inker on Alias Comic’s Tenth Muse while studying for a fine art degree at the University of the Channel Islands,  before quickly taking over as both penciler and inker on Tenth Muse. Since graduating in 2007, she has contributed to numerous Eisner award-winning projects, published four books, and worked with the Smithsonian National Museum of the American Indian.

Alvitre wanted to use her work to help people realize that LA, like all of the US, is native land. Ghost River, Alvitre’s most recent graphic novel, published in November 2019, focuses on the Conestoga Massacre of 1763 but aims to illustrate the Conestoga perspective on those events. The novel was funded as part of a program called Redrawing History and combined Alvitre’s storytelling with support from academics and tribal representatives. “This provided a bridge between a western and indigenous viewpoint on history,” Alvitre says. The novel cuts between scenes leading up to the massacre and a historian researching it in an archive, helping the reader understand how all history is a narrative crafted from a selection of sources.

Alvitre was not alone in seeing the need for indigenous representation in pop art. The broader movement that Alvitre’s art is part of took a name at Phoenix Comic-Con in 2011  when Arigon Starr (Kickapoo), Jacques La Grange (San Carlos Apache), and Theo “Teddy” Tso (Las Vegas Paiute) came together to form the Indigenous Narratives Collective. They gave a springboard to a movement of indigenous artists who had grown tired of seeing themselves excluded from history, and who wanted to use the comic art medium to center indigenous people in an accessible version of American history.

By 2016, this movement had outgrown Comic-Con and begun its own indigenous pop culture expo, IndigiPopX. The event has been held annually since then, and welcomes 1500 indigenous artists and creatives to a sort of decolonized comic-con hosted by Dr. Lee Francis, often called the Stan Lee of Indian Country. The event was started in part because indigenous comic artists and their fans had grown tired of being portrayed as objects and stereotypes in non-indigenous authored comics, as comics journalist James Leask (Metis) has illustrated in a series of articles for Comics Alliance. Instead of waiting for publishers like Marvel (who Leask specifically calls out for trafficking in stereotype), indigenous authors and publishers worked together to publish their own work and share it with a growing audience who were increasingly interested in a perspective on the past that their textbooks ignored.

I am a history professor, and while I don’t work directly with indigenous history, I do teach courses that include it. When I moved to the US from Britain, the first textbook I used had an indigenous history as a box out; a fun factoid that was ancillary to the narrative of manifest destiny. Gregg Deal, a Pyramid Lake Paiute artist, affirms this, and tells me that indigenous history only entered into his history class when it was “validated by colonialism”.

Written histories that address the colonization of the Americas overwhelmingly give the perspective of one group in society: the white colonizers. This situation is not dissimilar to the way indigenous language has been systematically undermined as lacking the access to knowledge that comes with the colonial language (the one I am writing in). Sure, we could write another textbook, but as Alvitre acknowledges, “it is going to take a complete reset to change the history that is used in the curriculums that they have been following for 50 years.” We might be as close as we will ever come to turning the education system off and on again right now, and this seems like the perfect time for people in my profession to embrace the incredibly well-annotated online version of Ghost River. 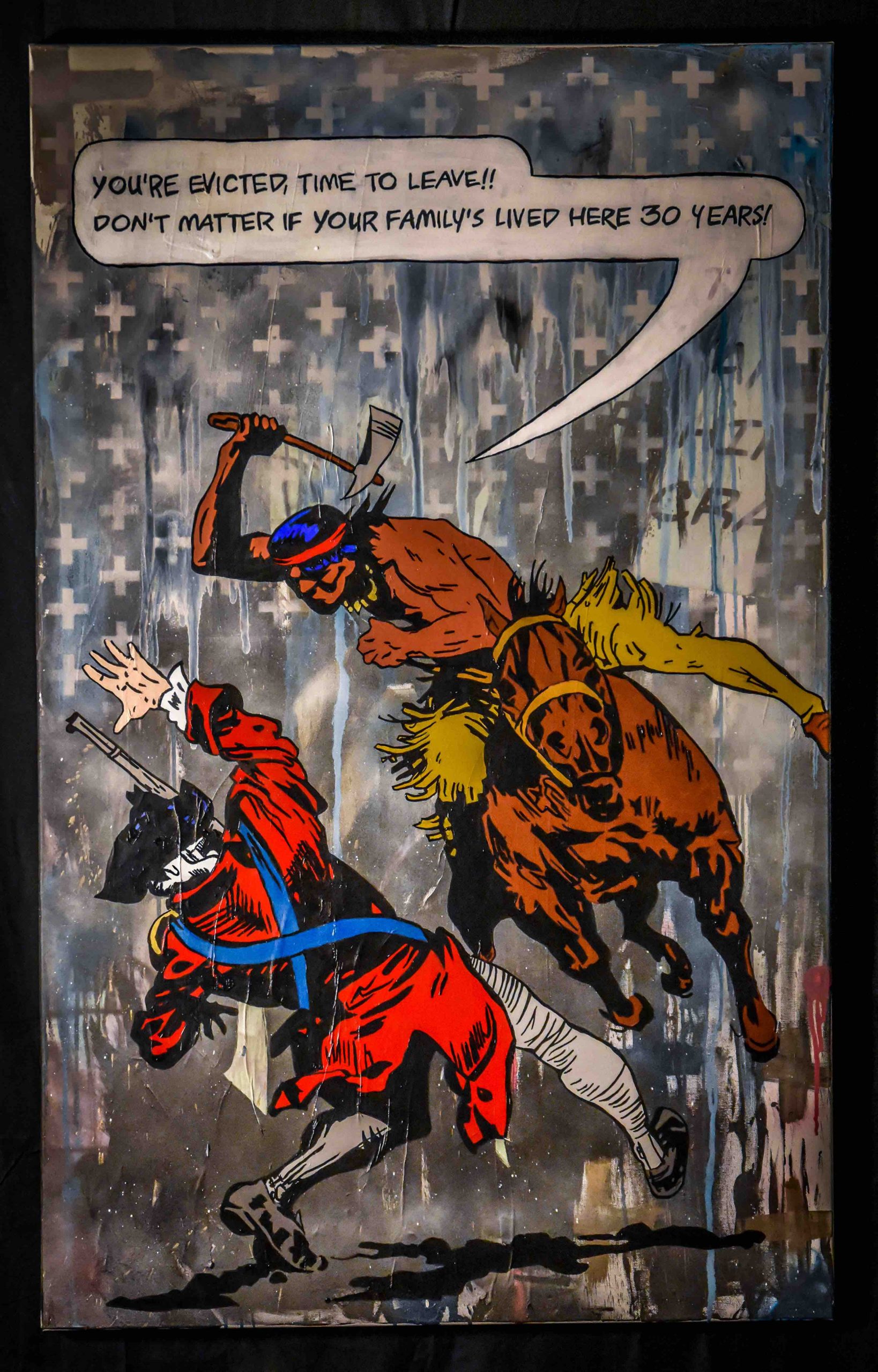 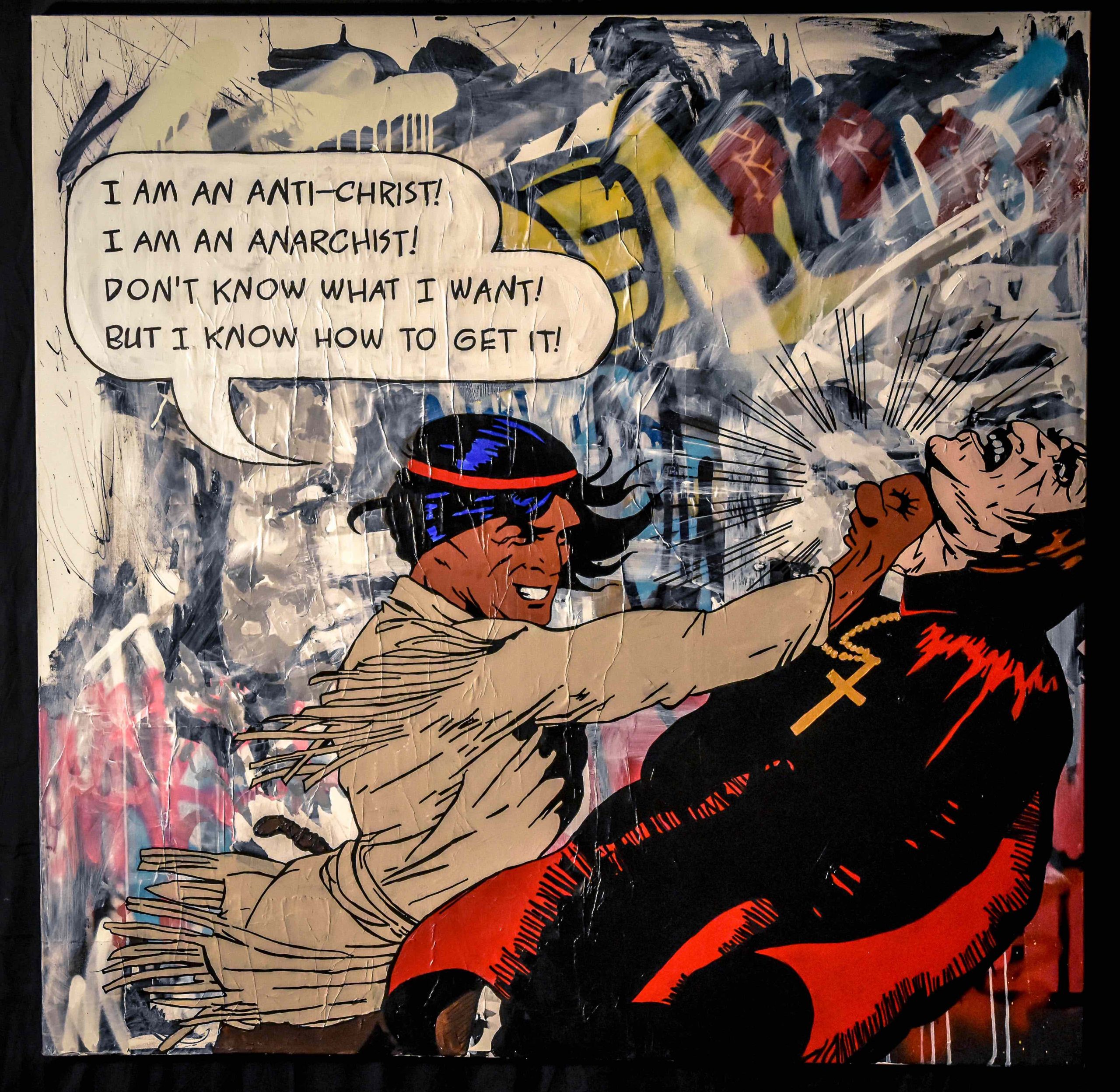 Of course, using cartoons to tell history is nothing new. Dime novels sold to European settlers moving west laid the groundwork for genocide, painting the native people they would meet as merciless savages. The deal has inverted those images in his paintings, reframing the narrative that often portrayed native Americans as little more than punching bags. He also includes punk lyrics, which he hopes “speaks to an experience that native people will be able to understand, and one that non-native people will hopefully be able to grasp.”

The deal is also quick to point out that indigenous history has always been flexible in the way it records and presents itself. “The histories were mostly oral, and then you get these drawings on buffalo hides, and then later drawings in ledger books,” he says. Both hide painting and ledger art served to record important events in the history of plains tribes. Graphic novels combine the approachability of street art, where truth is often spoken to power, with the ability to weave complex historical narratives. In this sense, comics in 2020 fit into the same tradition and narrative as pictographs, hide painting, ledger art, and basket weaving.

Libraries have often been gatekeepers of information, making knowledge easy to access for people with privilege. Alvitre’s own father was denied access to Tongva language recordings in university libraries. By taking part in the democratization of knowledge, Alvitre and other native artists are ensuring that it is not only accessible to a select few. The back half of her latest novel, Ghost River, contains source documents, study aids, and discussions between the stakeholders in the project: it shows students not just one snapshot of history, but how to make their own. Alvitre’s goal isn’t to rewrite history, it is “to give life to these people”. But in doing so, she may have helped a movement that will give life to many more, in the past and the future. 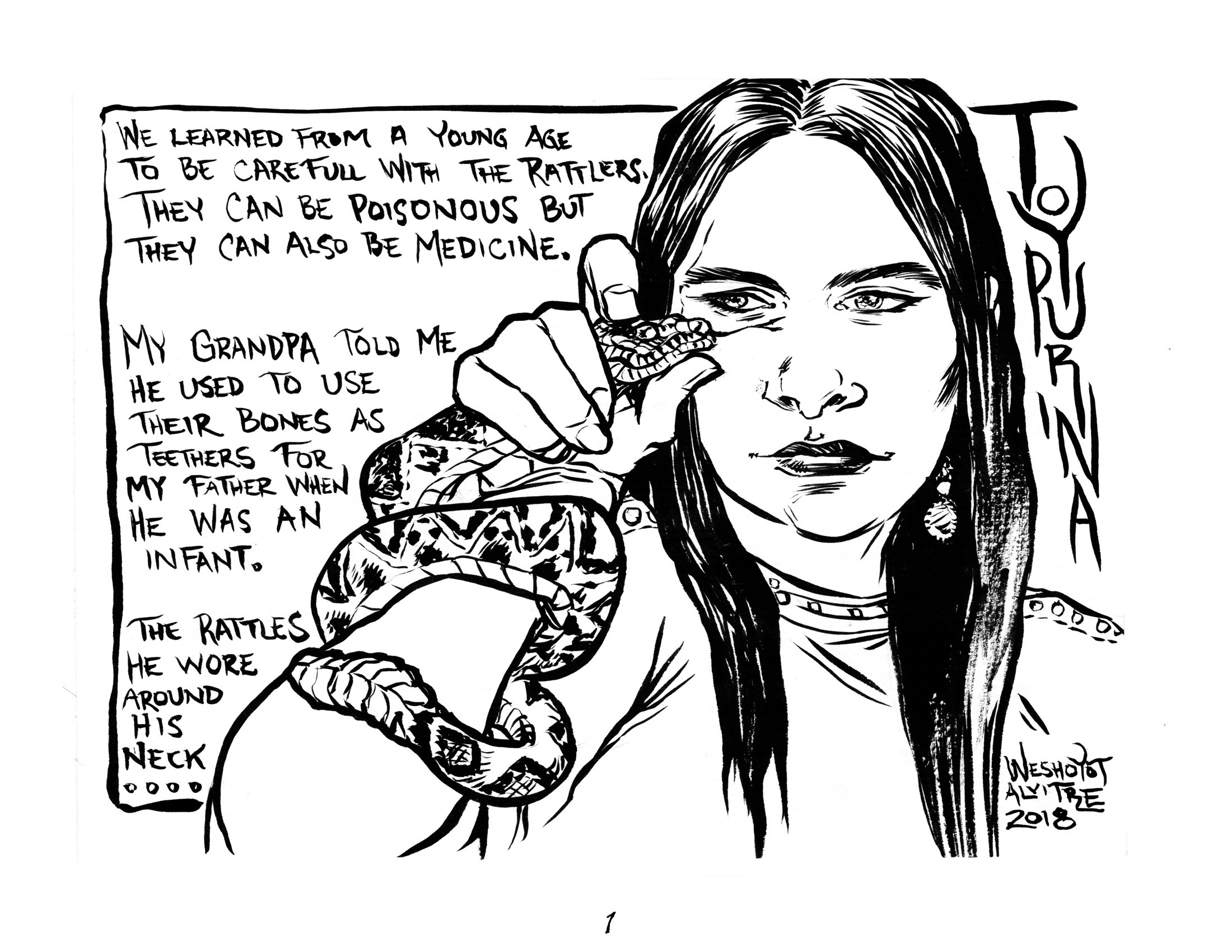 arrow_back Back to News